Casey McAlduff: As with The Cow and Couer de Lion, whose structure and voice combine to present an ‘exact self’, it is a breathing verse, a living, volatile creature that "infects or contaminates" the reader from the pages of Mercury.

For example, in your poem "Baraka", you recant the phrase "I CAN'T WAIT", creating a litany of what proves to be a rare blend of desire and greed and excitement, as well as actual physical need, and a desperate urge to speak or act before the time runs out. It reminds me too of a comment you made during your Bookworm interview with Michael Silverblatt: that the situation of the "I" is also usually a situation of the oppressed; that "I" is always a breaking of a silence. Can you talk about the relationship between this two-sided urgency and the way that it figures in your verse?

Ariana Reines: I'm happy that the greed in Baraka didn't escape you, Casey. That you see its desperation isn't merely just, isn't simply just. The way you formulate your question as such an elegant reading makes it urgent that I not deface it. I think the two-sided urgency you speak of runs throughout the book, which is full of x's. And exes.

CM: As a self-declared fan of 'early manuscript culture', how do you approach the process of revision in your own work? Do you consider each revision to be a new version, and thus a new poem? How do you keep the verse's emotions hot and honest to the moment?

AR: I tend to write quickly and revise slowly, but the main thing I labor over is structure. The structure of a book. There are small moments in poems I've tinkered with maybe twenty or thirty times, but the poem or sequence itself keeps its immediacy because it has to come out fast and just. Once the structure of the book is complete I make small adjustments to the poems as constituent parts of a whole, so that every part of the book functions faithfully, like a good machine, but breathes, like a living thing. Certain flaws need to stay in there so it doesn't deaden or become merely literary.

CM: Mercury is filled with a unique magic that is particularly palpable in the book's title piece. The mix of alchemy here, combined with the snake-like slithering of chant words across the pages, ends up brewing a deft voice that seems to be creating for itself an elixir of life, a way "to make sure that I am living." Does the setting of Salem, filling up in October as hoards of schoolchildren board their yellow buses with crayons packed into their pencil cases for grave rubbings, have any place in this series? If so, can you share some of the influence that Salem's history has on you as a writer, and in particular, as a female writer?

AR: A movie about the witch trials starring Vanessa Redgrave, called Three Sovreigns for Sarah Cloyce, scared me so much in sixth grade I developed insomnia and spent almost all my nights of the ensuing two years with the light on and the radio blasting oldies 103 FM, opening strategic holes into my jeans with sandpaper. When I was four, a visit to the Salem Witch Museum, with its wax dioramas of witches being hanged and crushed under stones, and with its black floor's huge light-up pentagram, left me wide awake in tears for weeks.

One way of describing my family predicament is that my mother was misunderstood, condemned and excluded, went mad, and lost everything. My publisher is a descendant of Rebecca Nurse, killed for a witch. I used to walk around a pond called Redd's pond where Mamie Redd, also killed for a witch, was said to moan on certain nights. And this is barely the beginning. Yes, Casey, I am sure that Salem's history has influenced me in every way. I know that there still lurks in me the fear that if I speak the truth as I know it, I will be locked up in a mental institution and then killed in public while a mockery of me is made. That Massachusetts is a place where you get thrown into a mental hospital against your will if you are a woman, or a place where electroshock (now called electroconvulsive) therapy can be administered to you even if you don't really want it... I am sure these nightmares go back to the witch trials.

If you've seen Titticut Follies or read Cool for You by Eileen Myles, or spent any time reading or thinking about Robert Lowell or Sylvia Plath or Anne Sexton you know that there is a very deep current of voluntary and involuntary confinement in nightmare mental hospitals in Massachusetts (and you are from Massachusetts, so I am sure you can add your own harmonics to this litany). There are happier Massachusetts emanations too of course, like the writing of Susan Howe, the transcendentalists, Emily Dickinson, George Whitman (RIP), Michelle Tea, Bobby Kennedy, a really weird fucking sexy accent.... But you asked about Salem and now I'm talking about Massachusetts...

Well I think I must act crazier than I am in order, deliberately, to preempt any accusations that might be lodged against my sanity. In fact I am sure that there is a dimension of insanity to my persona, such as it is, which I deploy in order to protect myself from suffering, as my mother did, defamation as a witch or insane woman. I am sure that it is this fear that prevents me from working, culturally, in a more direct or "useful" manner—as for example a scholar, or attorney, or journalist—or psychotherapist. Any profession in which my rationalism (or even just rationality)—my sanity and the performance of my sanity—would serve as legitimizing agents for the oppressed or misunderstood entities which I would champion would trigger my terror of suffering a witch's dishonor so regularly that I'm convinced I'd shatter.

As a poet I am permitted continually to subvert and dismantle my own charisma and authority, partly falsely, so I can trick myself into believing I somehow keep them safe by doing so, and partly truly, if only for the comfort of having taken myself apart with my own two hands, rather than let the state or the mob destroy me.

Casey McAlduff holds a B.A. in English with an emphasis in Creative Writing from the University of Southern California in 2009. Currently, she is an MFA Candidate in Poetry at St. Mary’s College, where she is also a Teaching Fellow. Since moving to California from Lexington, MA , Casey has developed an interest in the way that art is able to preserve the experiential sense of place, as well as the way that art allows individuals to converse with the world around them. Casey has pursued these interests by working for programs that promote poetry as an agent of social change and more specifically, as a means to increase literacy. In the past, she has worked for programs such as California Poet Laureate Carol Muske-Dukes’ non-profit organization, the Magic Poetry Blimp – a dramatic approach to the teaching of poetry in the classroom and in the community


Ariana Reines was born in Salem, Massachuestts. She studied French and English at Barnard College. She worked in restaurants, dungeons, bars, galleries, and street fairs, and was a doctoral candidate at Columbia University and at The European Graduate School, studying literature, performance, and philosophy with Sylvère Lotringer, Antoine Compagnon, Claire Denis, Giorgio Agamben, and others. (ABD) 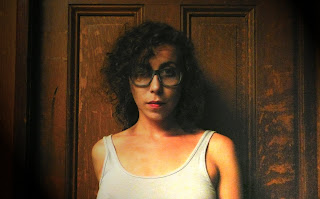 Her books include The Cow (Alberta Prize: Fence 2006), Coeur de Lion (Mal-O-Mar: 2007), Save the World (Mal-O-Mar: 2010; Fence (Audio): 2011), and the forthcoming Mercury (Fence: 2011). She has given readings across the United States and in France, poems have been anthologized in Against Expression (Dworkin + Goldsmith, eds) and Gurlesque (Glenum + Greenberg, eds), and her books have been reviewed, and other writings featured, on KCRW's Bookworm, the UK's The DotPod, and in The Fader, Flaunt, the Boston Review, RainTaxi, Soft Targets, LIT, BOMBlog, WebConjunctions, HTMLGIant, and in many other places.
Posted by Mumolo at 6:09 PM