“The new poetry won't present itself to us because we have theorized it correctly,
but because the situation is new and we have entered into it alive.” 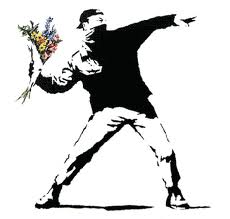